It is widely understood today that the current economic paradigms of growth and industrialisation need to shift towards a more inclusive and sustainable way of thinking. We need a new system that addresses growing inequalities in society, accounts for negative externalities, such as environmental pollution, and that explores new types of governance, for example through empowering citizens in decision making.

A key component in this transition is a shift from valuing short-term gains and profits towards long-term thinking that includes the next generations’ wellbeing, too. In 2019, EIT Climate-KIC, Europe’s leading climate innovation initiative, launched a series of new large-scale projects, so-called ‘Deep Demonstrations’, to explore systems innovation for a greener, net-zero future. The portfolio of interventions includes education, citizen engagement, finance, policy and other levers of change that catalyse fast decarbonisation. Out of the eight Deep Demonstrations currently in operation, one is called the Long-termism project. In it, eleven expert partners focus on changing mindsets and explore ways to stimulate long-term thinking. To foster long-term oriented behaviours, mindsets, and action, they are trying to answer a set of questions. For example: ‘What new types of governance and rule-setting are needed to redesign institutional structures?’, ‘Can frontier technological prototypes be used to redefine our notions of value?’, ‘How can we use the power of collective movements to democratise rulemaking?’ and ‘In what way can data transparency and capacity building empower individuals?’.

Enabling collective action and opening new democratic spaces can create a groundswell of pressure for change. One way of doing this is through social and economic experimentations, for example in the form of social simulations. Social Simulations combine game elements with systems analysis, role playing, and simulation techniques. This way, they allow players to experience hypothetical events and scenarios. In this blog post, I introduce SAVE THE FUTURE. It is a simulation that seeks ways to transform the financial system by exploring alternative notions of value. For example, it employs ‘green tokens’ as a complementary currency. The simulation was developed for EIT Climate-KIC’s Long-termism project and has been tested and further improved by project partners and volunteers.

Our current monetary system systematically encourages unsustainable behaviour patterns and threatens social and environmental sustainability. Because bank-debt money carries interest, the discounting of future costs and incomes inevitably leads to short-term thinking, as Bernard Litaer explains in the Club of Rome – EU Chapter report on money and sustainability. The process of compound interest (interest on interest) imposes exponential growth on the economy, which is, by necessity, unsustainable in a finite world. Furthermore, the set-up of our current financial system fosters wealth concentration and an increase in inequality. We need to re-think and shift the discourse around ‘money’. We need to empower individuals to recognize the current monetary system as a systemic cause for short-termism, inequality, and unsustainability. One popular, practical solution to this problem is complementing the prevailing monetary monopoly with a ‘monetary ecosystem’. The information and communication revolution that we are experiencing today, with innovations like the blockchain technology, can help us in this. Because they are open-source, such technologies prove it is possible to create pressure for change by enabling pioneers to take collective action and create alternative designs. ‘Emerging democratic socio-ecological money system(s) empower individuals by offering mechanisms for adequate resource allocation and behaviour change aligned with incentives.’ says Dr. Marcus Dapp, a cryptoeconomics expert at ETH Zurich and one of our Long-termism project partners. Although such a solution profoundly challenges the dominant fiat currency system, it can grow independently through addressing daily challenges faced by communities. For instance, it could adjust resource allocation to local needs. Over time, it could become a self-sustaining, resilient, less manipulable network of digital money and assets.

Within the Long-termism Deep Demonstration, the Centre for Systems Solutions developed the policy simulation SAVE THE FUTURE as a tool for testing various institutional and policy solutions that could be combined into an alternative, more sustainable and long-term focused financial system. The simulation is set in a stylized world, where players (divided into government, investors, and entrepreneurs) make choices about industrial investments, international trade, social development, and environmental management. In the process, they try to balance their own short-term goals with such long-term consequences for their country and surrounding lands as water pollution or wasteland creation. The simulation introduces new economic ideas, such as alternative currencies, to explore if and how they would shape the economic choices of participants. 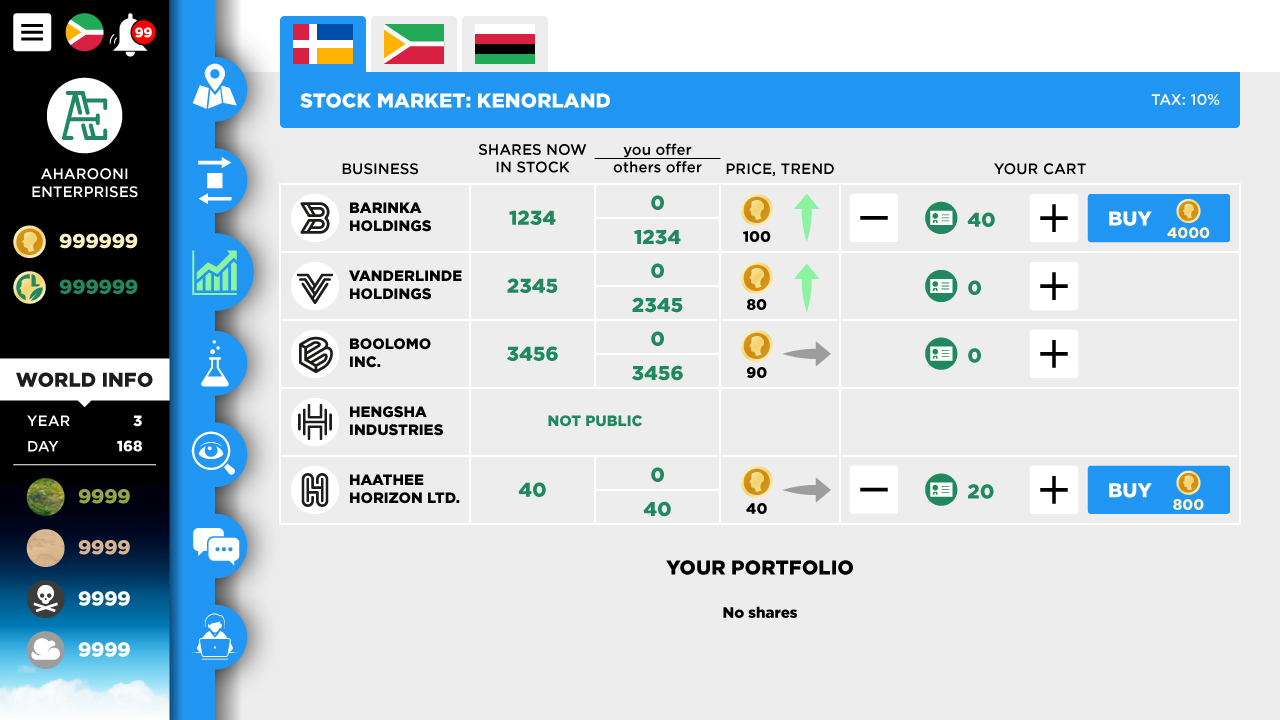 Stock market in the Save the Future simulation

The simulations conducted so far show that people take greater care of wastelands after the green currency, which enables profiting from environmental restoration, is introduced. The simulations revealed clearly that alternative currencies and their design do influence our behaviour in a desired way. We should take advantage of this discovery and use money and the financial system to help us transition towards a net-zero emission future.

experiencing scenarios for energy transition through a social simulation

In many countries worldwide, the topic of energy transition seems to be highly charged. The array of challenges connected to this process embraces a clash of worldviews, controversies over the efficiency of existing technologies, legitimacy and quality of planned and implemented policies, disputes over the “right” energy mix as well as other complex economic and social issues. Yet, the transition will inevitably have to be introduced soon, and both the process and the time framework of the change are the key to success. To add to this heated discussion and to suggest a way forward, the Centre for Systems Solutions, in collaboration with Wuppertal Institute and Thema1, has developed the Energy Transition Game.

The reality of simulation

The activity can be described as a social simulation—a type of face-to-face serious game for a large group of people that engages them in mock negotiation, confrontation and decision-making. In this particular case, participants step into the shoes of ministries, energy producers, technology startups, energy providers, and NGOs. Thrust into the harsh reality of the energy transformation, they don’t only have to deal with the associated technical complexity but also learn to manage complicated relations between each other’s conflicting ideas and agendas.

What they discover, wading through a seemingly endless list of emergencies to address, is that transformation is not a lonely business and, to lead it successfully, they have to step out of their silos and start working together. This revelation does not come instantly, of course. At the beginning many players are motivated mostly by personal gains. For example, in the initial rounds, energy producers often show no interest in the natural environment protection, investing in facilities that can ensure them stable profits rather than relying on uncertain sun- or wind-dependant energy sources. Such an attitude usually meets with severe public censure. NGOs’ representatives call for financial sanctions against such practices and demand more sustainable solutions being introduced. However, green technologies proposed by technology start-ups are often counter-effective, as they still depend on outdated infrastructure. This, in turn, has to be addressed by the government that – as you may suspect – doesn’t have enough budget to modernize it. So what is their strategy? Raising energy prices! And this is how the vicious circle continues.

With its lively dynamics, The Energy Transition Game gives room for collective problem solving and testing available options with their associated impacts on economy, ecology or society. The in-game world’s mechanisms mirror the most important features of our real world, making it easier for players to draw meaningful conclusions that may be furthered applied to solve real, not only simulated, challenges. For example, when played by policy-makers, it may help them anticipate potential trade-offs and delineate possible mitigation measures. How? By simply experiencing them, either through the games’ mechanics or through other participants’ feedback. Unlike in real life, however, such testing is safe and not linked to any fatal repercussions. It may thus serve to chart a desired course of action and prepare for plausible stumbling blocks. For this purpose, the Energy Transition Game has been successfully used at  multiple workshops organized, among others, with Estonian Ministry of Environment, German Environment Ministry, Wuppertal Institute, Climate-KIC, Systems Innovation Lab. 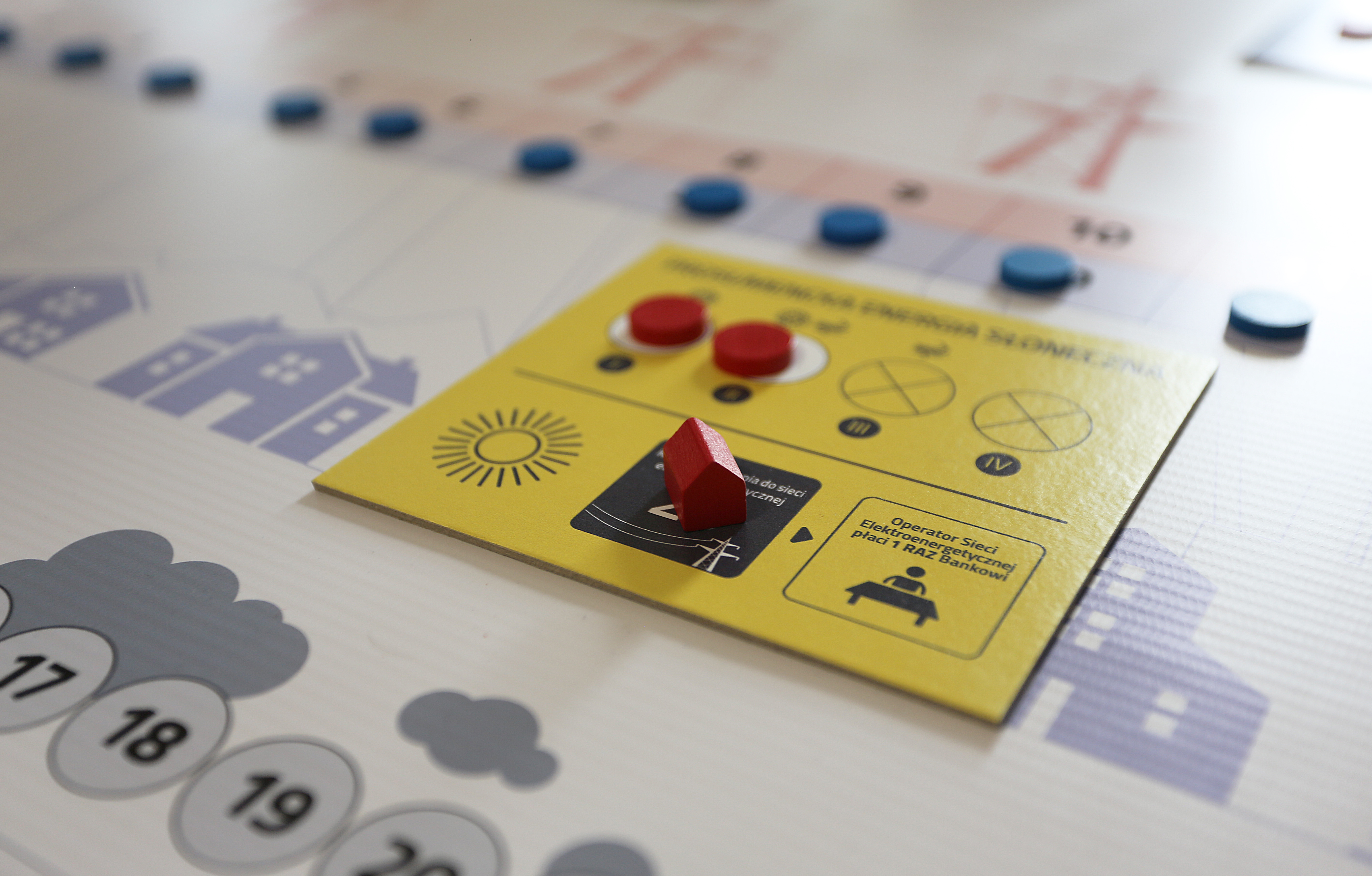 Green technologies proposed by technology start-ups are often counter-effective, as they still depend on outdated infrastructur. On the picture: a card representing prosumer solar energy production.

Although the simulation was designed to depict the problem of energy transition, it can also be used in other contexts. For example to address technical and social aspects of complex processes, such as multilateral agreements or coordination of joint initiatives where stakeholders of different backgrounds and values meet, etc. The Energy Transition Game encourages ‘out-of-the-box’ thinking, negotiation and mediation skills. By and large, it is a great tool to display problems and dilemmas emerging from complex, coupled systems that encompass environmental, social, economic and technical elements and interactions between them.